Into the Metaverse: Check Out Timex’s New Watch-Themed Fortnite Game

Luxury watches drum up a lot of hype, for sure. But the best-selling watch brand in the U.S. is actually Timex—a heritage brand that flies under the radar stylistically and when it comes to watch chatter.

The brand is certainly classic—it was was founded in 1854 in Connecticut as the Waterbury Clock Company—but it’s moving with real velocity into the so-called Metaverse, the name many have given the next iteration of the Internet, with the debut of a new Timex-themed challenge built for Fortnite (which, if you’re not a gamer, is one of the most popular video games in the world).

The “Race Against TimeX Fortnite” challenge sees players competing in multiple races against time in a virtual world where they skitter over huge watch dials and design their own stylish watches, among other watch-centric endeavors. Watches are also “power-ups,” providing players with additional speed and powers that give them a competitive edge. 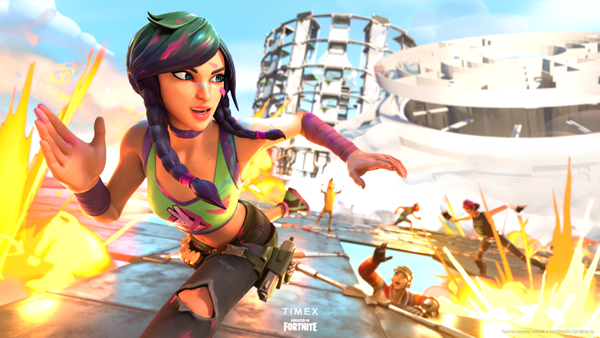 Top and above: Stills from the ‘Race Against TimeX Fortnite’ challenge

Fortnite and Timex are promoting the game with a fully integrated campaign that “bridges the virtual world with real life experiences, such as in-game giveaways, partnerships with gamer influencers and Gen-Z Fortnite enthusiast [and musician Travis Barker’s son] Landon Barker,” according to a statement from Timex. (Here’s Landon introducing the game to his followers on TikTok.)

And check out this teaser for the challenge—is this exciting product placement or what?!

Like Loading...
Previous Article
Bow-and-Arrow Jewelry For Sagittarius Season
Next Article
What to Do and See During the Second Half of New York City Jewelry Week