Jadeite, also known as Imperial Jade, is considered the very finest jade—though its cousin, the creamier nephrite, is the gem most people think of when they think of “jade.”

The rarer and more crystalline jadeite will be on glorious display at Christie’s Magnificent Jewels sale in Hong Kong (and online) Nov. 28. Among the jadeite jewels are a few that belonged to Rosamund Kwan, a Hong Kong native and celebrated actress who accumulated more than 60 credits in film and television throughout her career before retiring in 2007. Valued at roughly $12 million, Kwan’s collection contains 51 vintage pieces from jewelers such as Bulgari, Cartier, Louis Vuitton, and Van Cleef & Arpels.

“I only collect the pieces that I fall in love with at first sight,” Kwan recently told Christie’s. “Many were bought during my trips around the world, often on the spur of the moment, and they conjure very fond memories. Whenever I lay my eyes on them, the wonderful stories of my trips come to mind.”

Among the cache is an extraordinary jadeite cabochon and white sapphire and diamond necklace designed by Edmond Chin of Etcetera, fetch up to $3.8 million. Chin crafted the necklace in a twisting wave pattern that sees diamonds and white sapphires mesh with translucent jadeite in the form of 22 cabochons and 44 supporting claws (pictured below). 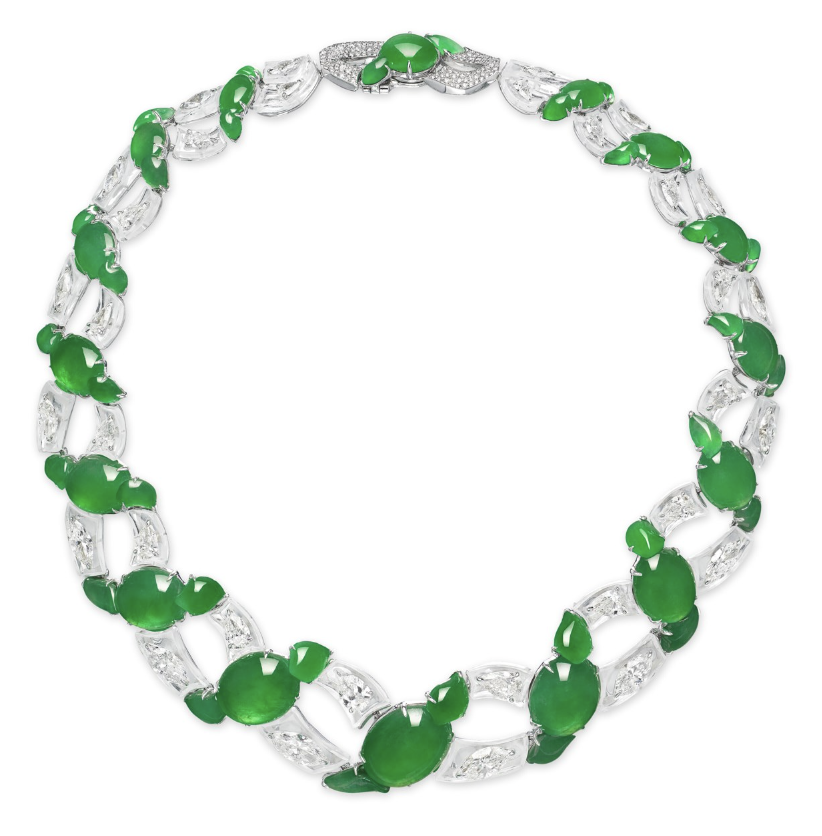 Jadeite and diamond necklace designed by Edmond Chin of Etcetera, estimated to sell for up to approximately $3.8 million

Also on the block are a pair of tri-color jadeite bangles—each in shades of green, orange, and white—forecast to fetch up to approximately $480,000.

Jadeite’s transparency and watery vibe has made it, arguably, the most coveted gemstone in China. And it’s a relatively tough stone—ranking 6.5-7 on the Mohs scale—but also soft enough to carve intricate designs into it. 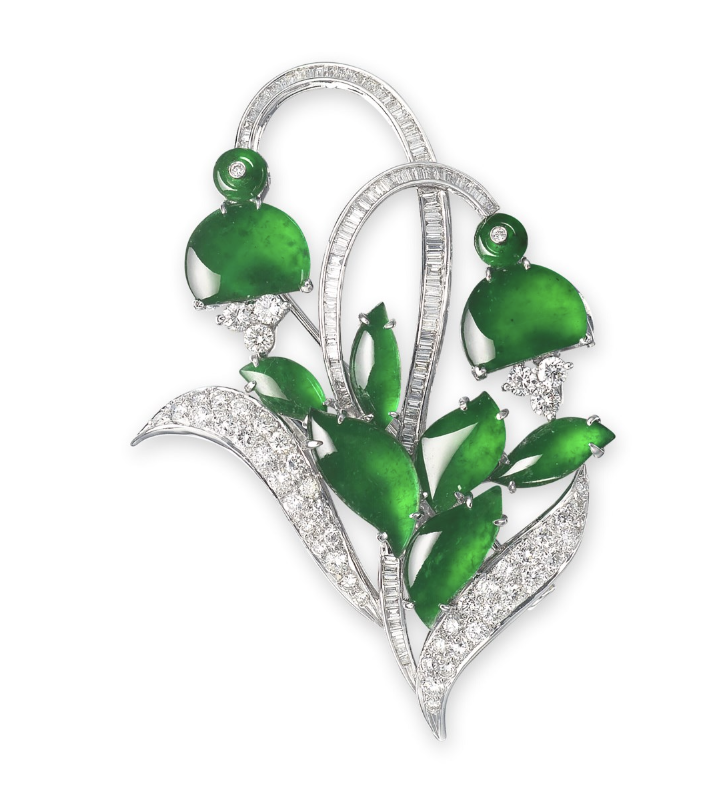 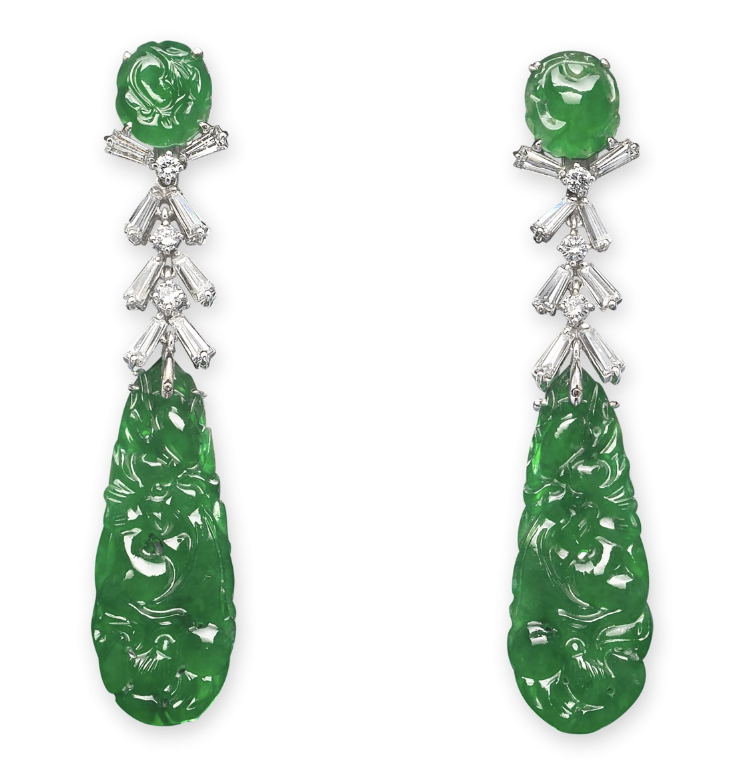 Carved jadeite plaque earrings with baguette and round diamonds, estimated to fetch up to approximately $10,000

According to the Gemological Association of Great Britain, high quality jade “may be compared to certain rare color diamonds, with prices per carat far above ruby or sapphire. Some exceptional pieces, with unique provenances, have fetched incredible prices,” such as the green nephrite seal of the eighteenth-century Chinese Qianlong Emperor, which sold for $15.7 million at Sotheby’s Hong Kong in 2010, and Barbara Hutton’s Imperial green jadeite necklace mounted by Cartier, which net $27.22 million at a 2014 Sotheby’s auction. 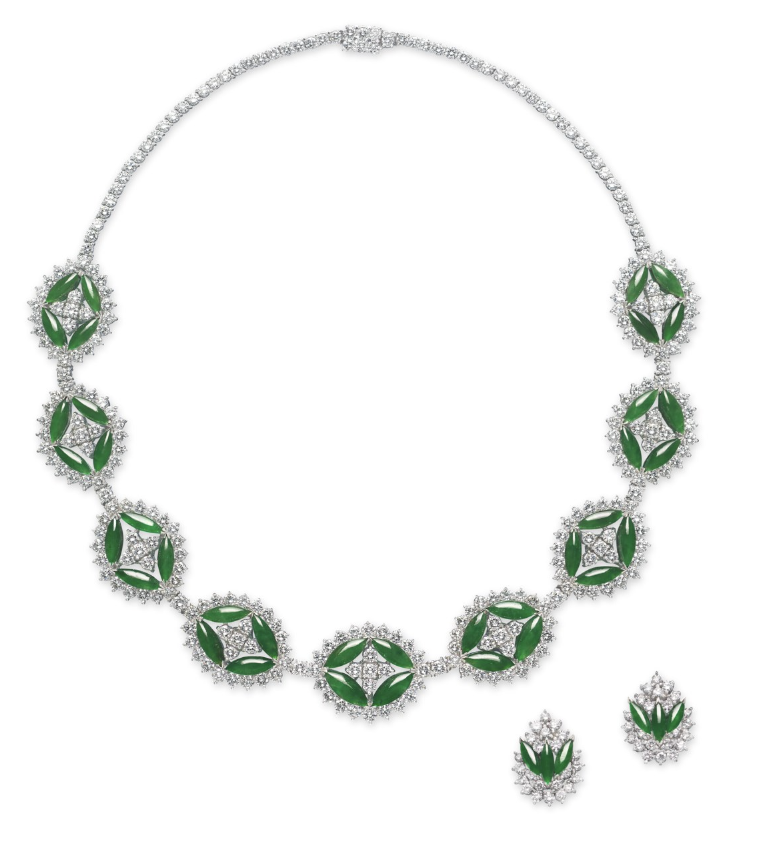 Jadeite comes in white, yellow, orange, green, lavender, and black, though green and lavender are the most coveted colors. And while nephrite has been an influential stone in Chinese art for thousands of years, jadeite was only discovered in Myanmar, which was then under Chinese rule, in 1784. At the turn of the 19th century, the gem become more well-known, primarily because Empress Dowager Cixi of China—who ruled behind the scenes during the reign of two emperors in the Qing Dynasty period—was an aficionado of the gem.

This resulted in noblemen and officers wearing the gem and gifting it to their queen, all of which increased the gem’s value and desireability. At one time, the royal court of China had a standing order for all available jadeite of the highest quality, which earned it the “Imperial jade” moniker.

Jade is also popular the world over for its purported good juju. Legend has it that jade protects wearers against misfortune. It’s also known as the stone of eternal youth, and is viewed as a booster for increasing wealth, longevity, and the ability to live life to its fullest. What’s not to love about that?

Top photo: Jadeite and diamond pendant and pendant/brooch on sale this month at Christie’s (all photos courtesy of Christie’s)

Like Loading...
Previous Article
Q&A: ‘House of the Dragon’ Jeweler Jessica De Lotz, Who Also Did Jewels For ‘Killing Eve’
Next Article
Looking to Boost Your Company’s Focus on Sustainability? A New Online Course Can Help