Maine Tourmaline: Everything You Need to Know About the Northeast’s Snazziest Gem

The great state of Maine may be most famous for its blueberries and lobsters, but gem hounds know it’s also renowned for its watermelons—the green-and-pink “watermelon” variety of tourmalines, that is, which was first mined in the state in the 1820s.

Local tourmalines are so beloved by Mainers—and are of such high gemstone quality, rivaling those from California, Brazil, and the Himalayas—they were declared the state’s official gemstone by the state legislature. The gems range from black and white to shades of red, green and blue. But the most sought-after hue by jewelers and consumers alike are the green and pink “watermelons,” most often cut in triangular geode slices that mimic the fruit when sliced.

Tourmalines, which are October’s birthstone along with opals, were first discovered in the U.S.’s first commercial gemstone mine by Elijah Hamlin and Ezekiel Holmes, on what’s now known as Mount Mica in Paris, Maine, in 1821.

But that wasn’t the big windfall in the history of Maine tourmalines. That would come in 1972, when George Hartman, Dean McCrillis, Dale Sweatt and contract miner Frank Perham mined more than a ton of gem-quality tourmalines near the top of Plumbago Mountain, in Newry, Maine. The Dunton Mine Quarry, as they later named it, would be mined for the next two years and produce the primary supply of Maine tourmalines jewelers sell to this day.

“It really put Maine on the map in terms of gemstone mining in the state,” says Maggie Kroenke, store manager at the Maine Mineral & Gem Museum in Bethel, Maine. “And it was a really big deal for North America.” 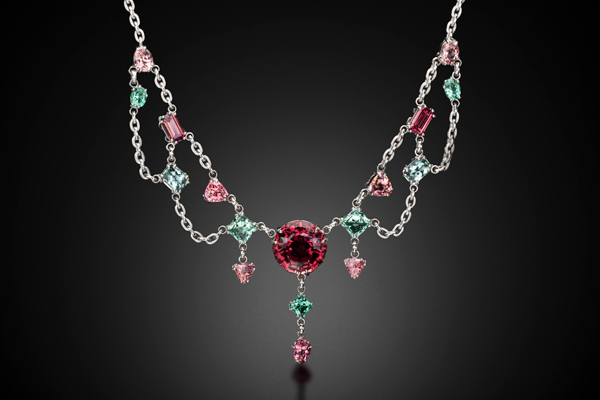 Newry necklace: Featuring 88.07 total carats of tourmaline, jeweler Scott Lawrence handcrafted this necklace using platinum and palladium. All of the gem material these stones were cut from was mined at the Dunton Mine in Newry, ME from 1972-1974 (photo courtesy of MMGM/photo by Jeff Scovil)

To celebrate the milestone, the museum hosted “The Big Reveal” on Oct. 8 featuring twelve jewelry masterpieces made with some of the gemstones from that historic find. There’s also 100.15-carat large tourmaline gem on display, as well as other treasures—yes, from the Dunton Mine Quarry—for sale at the museum store.

Elwyn Wooster, owner of Unique Rock Shop in Verona Island, Maine, notes that a Maine jeweler shouldn’t be without Maine tourmalines, particularly the watermelon variety. “Back in the ’70s, they had so much of it, figuring that would be the tip of the iceberg. But, since then, because of short supply, the price on good quality gemstones goes up every year.” 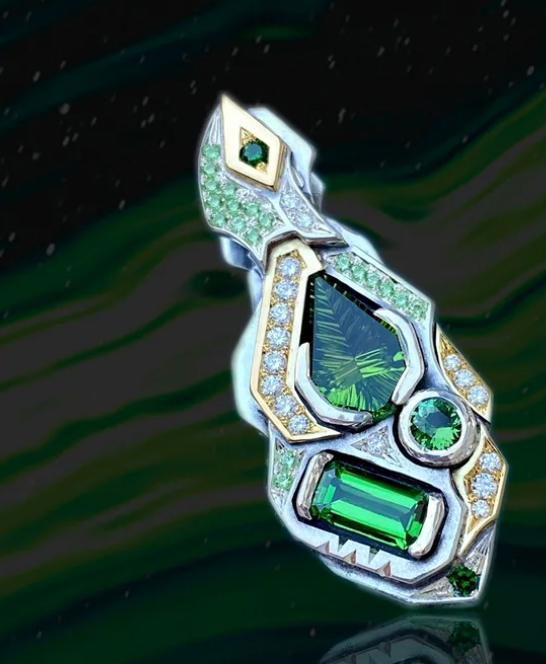 These days, Wooster sells fine quality Maine tourmalines for about $500 a carat. Most people prefer the traditional pink and green gemstones, but a very rare blue color sold a few weeks ago. The most common—and less expensive—tourmalines are black, but no less desirable.

Annette Evans, co-owner along with husband Mark Evans, of R.D. Allen Freeport Jewelers in Freeport, can trace much of the store’s supply back to the 1972-1974 mining days. “I’ve been up there,” she says, noting there are numerous different hues with which she’s worked. “I’ve stood on that hallowed Dunton Mine ground.” One of the prettiest is a light green hue she calls “Maine Wintergreen,” a seafoam-y batch she recently acquired.

“More than half of our gemstones are Maine tourmalines,” Evans says. “If you want to buy somebody a gift from Maine—something that’s authentic—[Maine tourmaline] is easily the most popular gemstone by virtue of its color and provenance.” In addition to commemorating vacations, the gemstone is used as an engagement stone.

And she’s seen the effects the state’s most precious gem has on shoppers. “They make people happy,” she says. “There’s a joy that comes from having a little bit of Maine.” –Kristin Young