BeReal is the Hot New Social Media App. Should Your Business Be On It?

“Wait, I have to take a photo for BeReal!” chirped my 15-year-old niece while at my house for a casual family dinner a couple of months ago.

My ears perked up. I’d heard of BeReal, the new French social media network that prompts followers to capture and post unfiltered and “authentic” photos of themselves or their surroundings. But I didn’t give it much thought, because until plugged-in teenagers embrace a social network, it doesn’t really exist, right? Kidding. But only a little.

Now it seems BeReal’s time has arrived. In a recent study, NPR found that teens prefer BeReal over Instagram and even TikTok. Sensor Tower reported in July that the app had been installed more than 20 million times, up from two million in January 2022. And big brands including Chipotle, and e.l.f. Beauty have already planted their flags on the app. TikTok is clearly threatened by BeReal – the app debuted a feature called TikTok Now, following the same concept, in September. 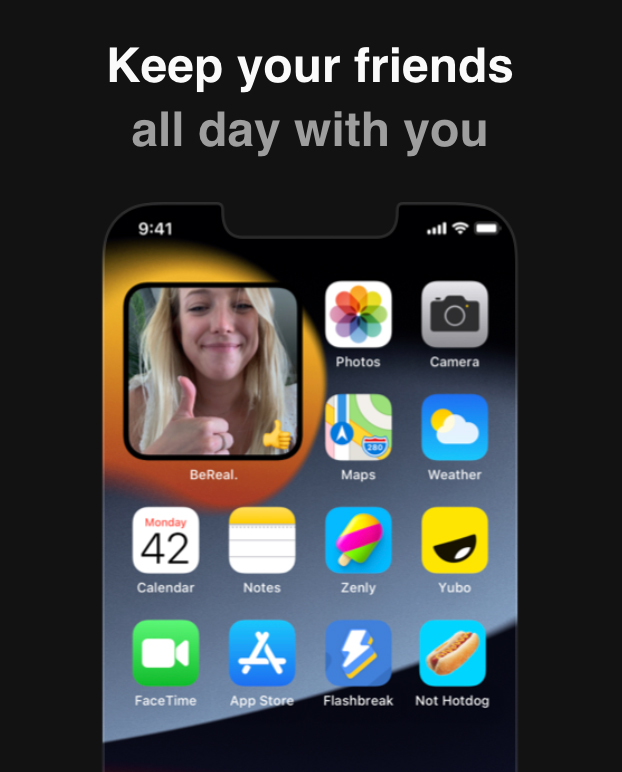 Despite all this, no one is willing to say that BeReal is truly ready for the big time or will even be around in a couple of years. In fact, brands (which at this point have been trained to jump on any digital platform making inroads with Gen-Z), seem to have a casual attitude about their presence on BeReal. Laurie Lam, chief brand officer of beauty brand e.l.f. told Fast Company in July that the company isn’t worried about the app morphing into a short-lived fad. “The objective was very simple—create a space where our fans can see this unfiltered, authentic e.l.f. life,” she said. “If the space ends up moving somewhere else, we’ll follow.”

But small brands are already struggling to keep up with content creation for Instagram and TikTok (and maybe Facebook), so is BeReal a marketing tool companies should be embracing now or in the near future?

If you’re thinking about hopping onto BeReal, consider the following:

Who’s Behind BeReal?
BeReal is a France-based app that was founded and developed by Alexis Barreyat, a former employee of GoPro, and Kevin Perreau in 2020. In April 2022, the company nabbed a $30 million funding round led by Andreessen Horowitz and Accel, and in Mary 2022 secured $85 million in a funding round led by Yuri Milner‘s DST Global, increasing its valuation to about $600 million.

The Appeal of BeReal
BeReal is the backlash to all the overly filtered, beautifully produced photos and videos that make up the Instagram universe. So, if Instagram isn’t the “real” world (as everyone now knows, it’s a highly curated one), BeReal seeks to be the opposite. There are no filters on BeReal, so users can’t enhance their photos even if they want to. And there are no follower counts, so follower competition—a source of very real stress for many teens—vanishes.

How BeReal Works
Every day at a random time, everyone on the app gets notified to simultaneously shoot and share a real-time photo. You must do this within two minutes of the alert—the idea is you don’t have time to overthink your image, you just point and click what’s most interesting in your immediate surroundings. To be successful on BeReal, you need to be willing to tether yourself to your phone nearly all day, every single day. You never know when the call to post might come. Being on BeReal’s leash might sound exhausting for solo-preneurs and small businesses; for big companies with robust social media staff, it’s an easier lift.

You Can’t Advertise on BeReal
The app doesn’t allow traditional advertising, but brands are already doing giveaways, contests, and showcasing collaborations on their feeds. As is the case for all social media platforms, innovation and creativity are prerequisites to success in BeReal’s less glossy and flossy environment. —Emili Vesilind