Home Retail This Rare Patek Philippe Watch Could Fetch Up to $2.6 Million at Auction
Retail

This Rare Patek Philippe Watch Could Fetch Up to $2.6 Million at Auction

Sotheby’s Important Watches auction on Oct. 5 will be led by a timepiece many consider to be one of the most important watches ever made: Patek Philippe’s Sky Moon Tourbillon 5002.

This “white whale” of Patek models is expected to fetch between $1.3-$2.6 million at the Hong Kong-based sale, which will also feature over 200 timepieces—including a double-signed Patek Philippe Tiffany & Co.-blue Nautilus and rare examples of Rolex sport models. “The offering in this sale encompasses all the wonders of horology, curated not only for seasoned collectors, but catering to the demands of young watch lovers—particularly those aged forty and under, who accounted for 67% of total bidders in our April sale,” said Joey Luk, head of watches for Sotheby’s in Asia, in a statement.

The Sky Moon Tourbillon Ref. 5002 was Patek Philippe’s most complicated wristwatch at launch and is the brand’s first creation that features a double dial. The timepiece boasts twelve complications on two dials, a mechanical feat that was inspired by the Star Calibre 2000 pocket watch featuring a complex sky-chart, which Patek Philippe miniaturized it to fit onto a wristwatch. 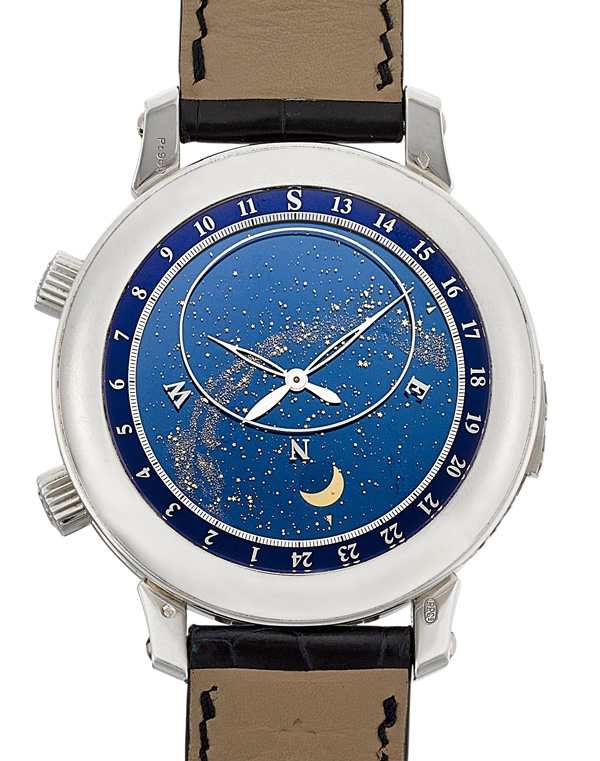 “Such is the complexity of the 686-part movement, including a tourbillon adjusted to run within a high precision rate of -2/+1 seconds maximum daily variation,” details the watch’s Sotheby’s listing. “With astronomical indications including a retrograde perpetual calendar, quarter moon phases, the meridian passage of Sirius (the brightest star in the sky), the age and angular motion of the moon plus sidereal time and a celestial chart of the northern hemisphere and a horizon ellipse, the 5002 exemplifies the impact astronomy has made on the advancement of human civilization.”

Additionally, the double-dial watch is distinguished by its rarity; only two 5002s are manufactured each year, so there aren’t many floating around the galaxy.

As consumers becoming increasingly aware of lab-grown diamonds, they will naturally gravitate...

Family-owned jewelry retail chain Reeds, which has over 60 stores in 13...

’Tis the season to social media post your heart out! And jewelry...