Heritage jewelry brand Verdura, in collaboration with its workshops and lapidary partners, has created a special ring to support the people of war-torn Ukraine.

The atelier has crafted a limited edition of its iconic Three Stone Ring in the blue and yellow colors of the Ukrainian flag, using blue topaz and yellow citrine set in 18k yellow gold. One hundred percent of the proceeds from the sale of the $14,500 ring will be sent to nonprofit World Central Kitchen, which is providing meals to children, women, and men displaced by the war in Ukraine.

World Central Kitchen, founded by famous chef and humanitarian José Andrés, provides meals in response to humanitarian, climate, and community crises around the world. The nonprofit partners with organizations to activate networks of food trucks and emergency kitchens, and provides freshly made, nutritious meals to survivors of disasters quickly and effectively. The sale of the dazzling gemstone ring will feed thousands of people in need in Ukraine. 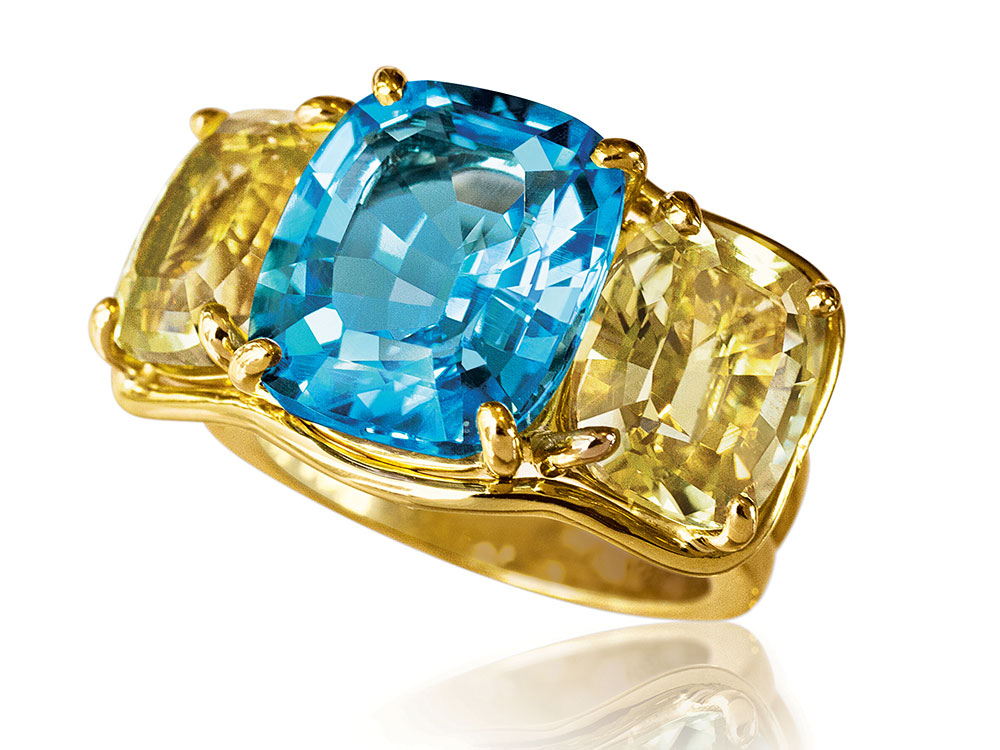 Top and above: The Three Stone Ring Verdura created to benefit the World Central Kitchen’s aid in Ukraine (courtesy Verdura)

Verdura founder Duke Fulco di Verdura debuted the Three Stone Ring, designed for socialite and philanthropist Dorothy Paley, in 1941. And today it’s one of the house’s most recognizable designs. The trio of gems in any Three Stone Ring “can represent past, present, and future, as well as the virtues of friendship, love, and fidelity,” suggests the brand in a recent statement, which detailed that, “The duke enjoyed creating a bold mix of colors in the warm glow of 18k yellow gold.”

Verdura’s wasn’t the first three-gemstone ring style, but it’s become a touchstone in jewelry design. Demand for three-stone ring styles (like any jewelry style) ebbs and flows. But they happen to be wildly popular right now, so the sale of the charitable Verdura ring is all but assured.

Duke Fulco di Verdura began his career in 1920s Paris as a jewelry designer for Coco Chanel, before relocating to New York City in 1934 where he became a favorite jeweler to Hollywood stars including Greta Garbo and Marlene Dietrich, New York society, and prominent Broadway entertainers of the day.

In 1973, Verdura sold his stake in the business to his business partner, Joseph Alfano, and in 1985, Alfano sold the company to Ward Landrigan, a former head of Sotheby’s American jewelry department. Ward and his son, Nico Landrigan, currently head up the historic jewelry firm.