Rubies, July’s birthstone, have a highly romantic past that includes encounters with Hollywood royalty and European aristocracy. Due to their rich red hue, they’ve come to signify powerful emotions and are generally associated with affairs of the heart. In short, rubies seduce like no other gem.

The word ruby comes from Latin ruber, which means ‘red.’ And in the ancient language of Sanskrit they were called ratnaraj, with translates to ‘king of precious stones.’ Rubies were first found in Burma (now Myanmar) in the 7th century. Vividly saturated from pinkish red to pigeon blood, they were believed to possess the power of life. Fast forward to medieval times, and they were worn as adornments and thought to be talismans that guaranteed wealth, wisdom, beauty, and everlasting love. Today, rubies are prized for their beauty, color, and versatility, and the finest examples compete in price at auction with the costliest of diamonds.

There have been several famous rubies and ruby jewels throughout history. Here are a handful we’ve always admired: 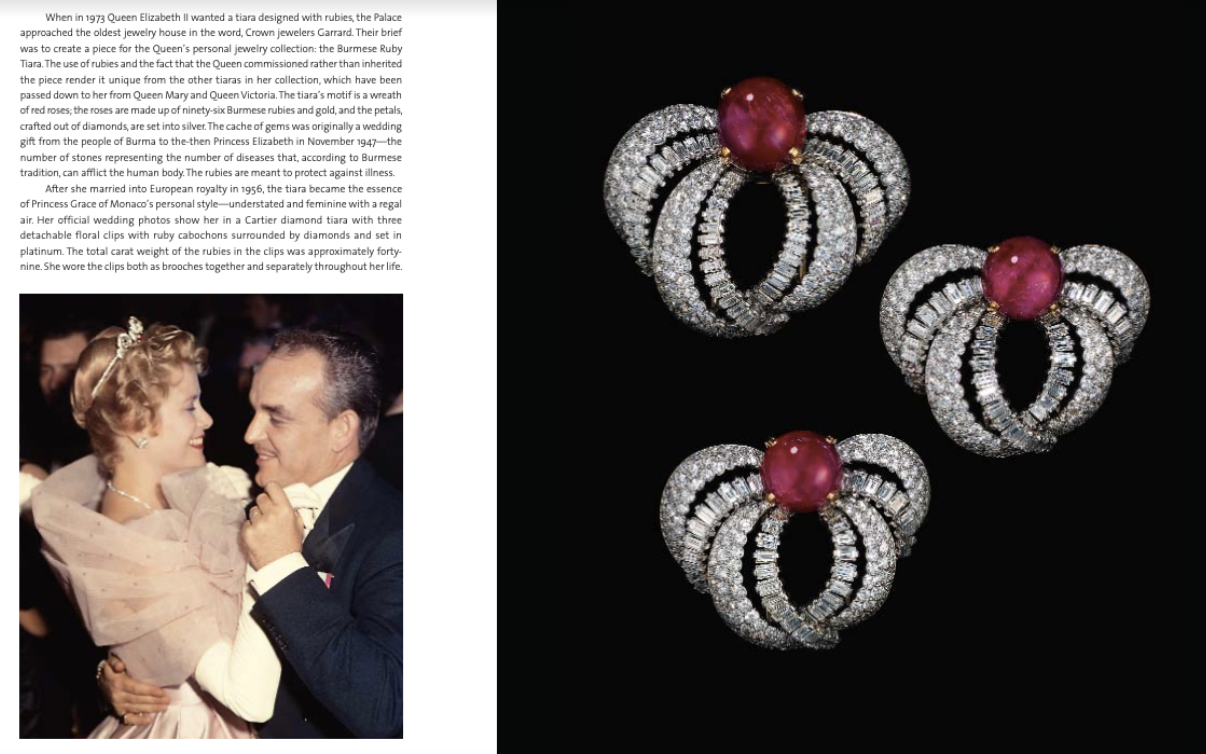 Grace Kelly in her ruby tiara (left), and the clips that she wore independently (Beth Bernstein, ACC Artbooks, 2015)

Grace Kelly’s Tiara
Understated and feminine with a regal air, Grace Kelly who became Princess Grace of Monaco, wore her Cartier diamond tiara with three detachable floral clips with ruby cabochons surrounded by diamonds and set in platinum in her official wedding photo and then wore the clips both as brooches together and separately throughout her life. 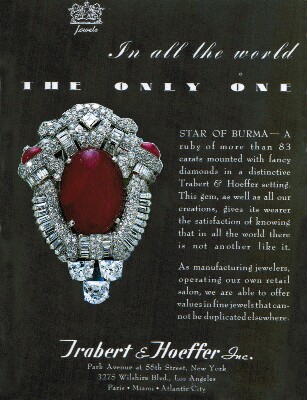 The Star of Burma
Howard Hoeffer of Trabert & Hoeffer-Mauboussin purchased the Star of Burma, an 83 ct. cabochon-cut star ruby, which soon had a movie role of its own. The title sequence of the musical comedy Vogues of 1938 features a gloved hand showing the Star of Burma set in a platinum and diamond bracelet. 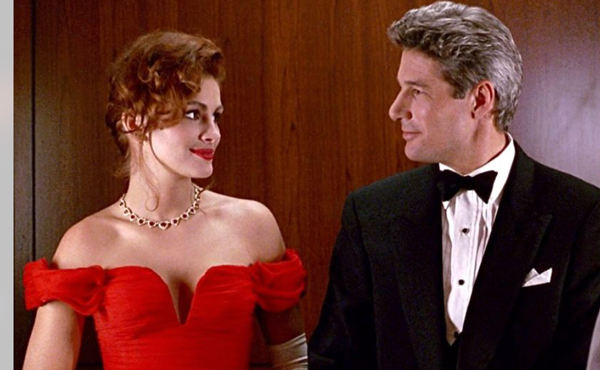 The Pretty Woman Necklace
Speaking of films, who can forget the 1990 movie Pretty Woman when Richard Gere as Edward surprises Julia Roberts as Viviane with a jewelry box for her to open—and playfully snaps the lid of the case on her fingers (an improvised prank by the actor). The necklace is a ruby and diamond dazzler, which was custom designed for the film by French jewelry house Fred Joaillier. 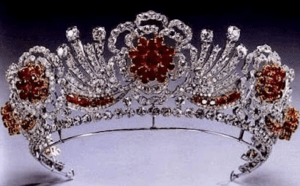 Queen Elizabeth’s Burmese Ruby Tiara
When in 1973 Queen Elizabeth II desired a tiara designed with rubies, the palace approached crown jewelers Garrard. The Burmese Ruby Tiara consists of a wreath of red roses made up of ninety-six Burmese rubies and gold. The petals are crafted out of diamonds, set into silver. The gems were originally a wedding gift from the people of Burma to the-then Princess Elizabeth in November 1947 to protect against illness and harm. 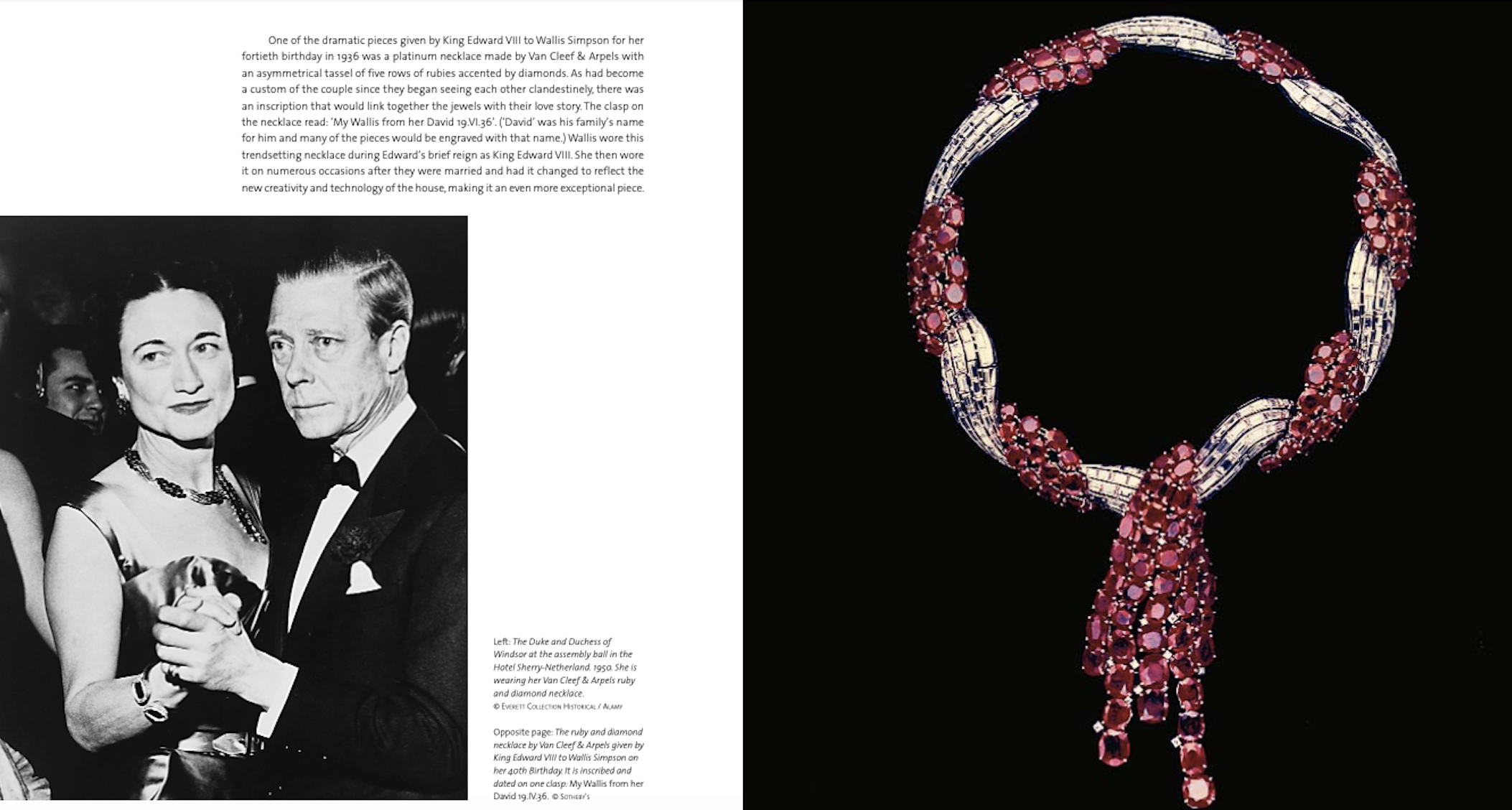 The Duchess of Windsor (dancing with Duke of Windsor) and her ruby bracelet (Beth Bernstein, ACC Artbooks, 2015)

Duchess of Windsor’s Rubies
Two of the ruby pieces owned by the Duchess of Windsor help document the love story between a king that abdicated his throne (Edward VIII) for the woman he loved. It had become a custom of the couple since they began seeing each other clandestinely for each jewel to bear an inscription that would link together the jewels with their romance. In 1936, Wallis Simpson was gifted a platinum necklace by Van Cleef & Arpels with an asymmetrical tassel of five rows of rubies accented by diamonds while he was still the king. The clasp on the necklace read: ‘My Wallis from her David 19.VI.36’. (‘David’ was his family’s name for him and many of the pieces would be engraved with it) Wallis wore it during Edward’s brief reign as King Edward VIII and then on numerous occasions after they were married.

The couple often used the expression ‘HOLD TIGHT’ to comfort and support each other in difficult times. This was the inscription Edward VIII had had engraved on a Van Cleef & Arpels platinum, ruby, and diamond bracelet around the time that he first approached her second husband, Ernest Simpson, about seeking a divorce from Wallis. 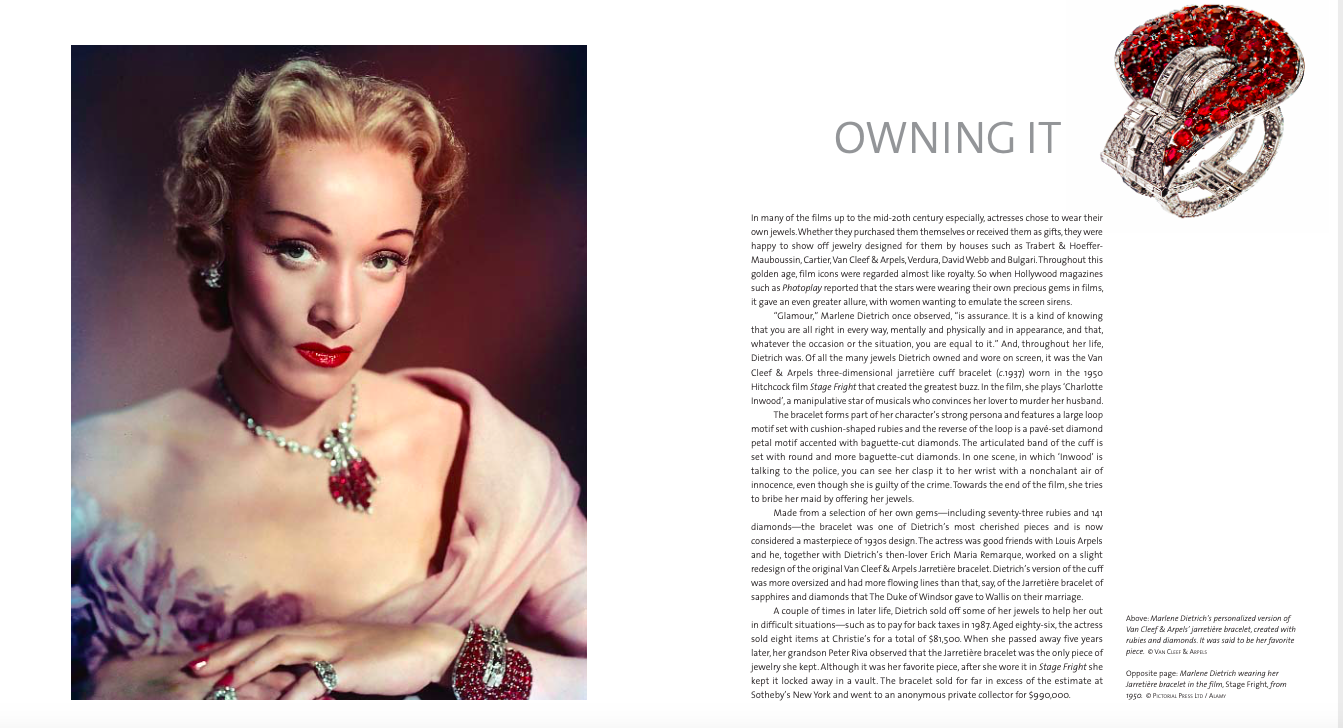 Marlene Dietrich’s Jarretière Bracelet
Jewelry collector Marlene Dietrich’s often wore her own pieces in films. Reportedly her most cherished jewel was a scene stealer in the 1950 Alfred Hitchcock film Stage Fright. Created from a selection of her own gems—including seventy-three rubies and 141 diamonds—the bracelet was a redesign of the original Van Cleef & Arpels Jarretière bracelet.  Later in her life, Dietrich sold off her jewels. When she passed away, the Jarretière bracelet was the only piece of jewelry she kept. It blasted Sotheby’s New York’s price estimate and went to an anonymous private collector for a whopping $990,000. 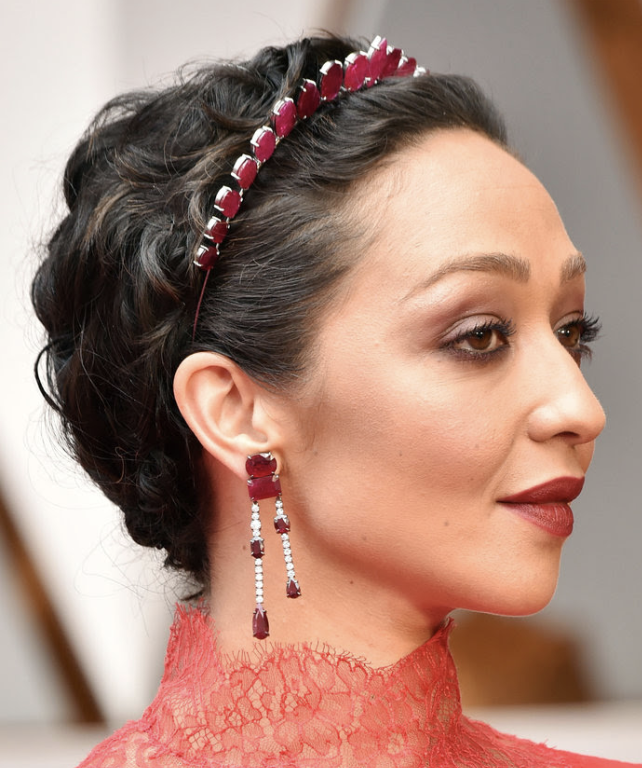 Ruth Negga’s Ruby Tiara
One of the most memorable red carpet jewelry moments in the last five years was in 2017, when Ruth Negga, the talented co-star of Loving, appeared at the Academy Awards wearing an Irene Neuwirth x Gemfields tiara crafted out of different shaped Mozambique rubies. Neuwirth worked on this vibrant jewel, along with earrings and a ring, with stylist Karla Welch. 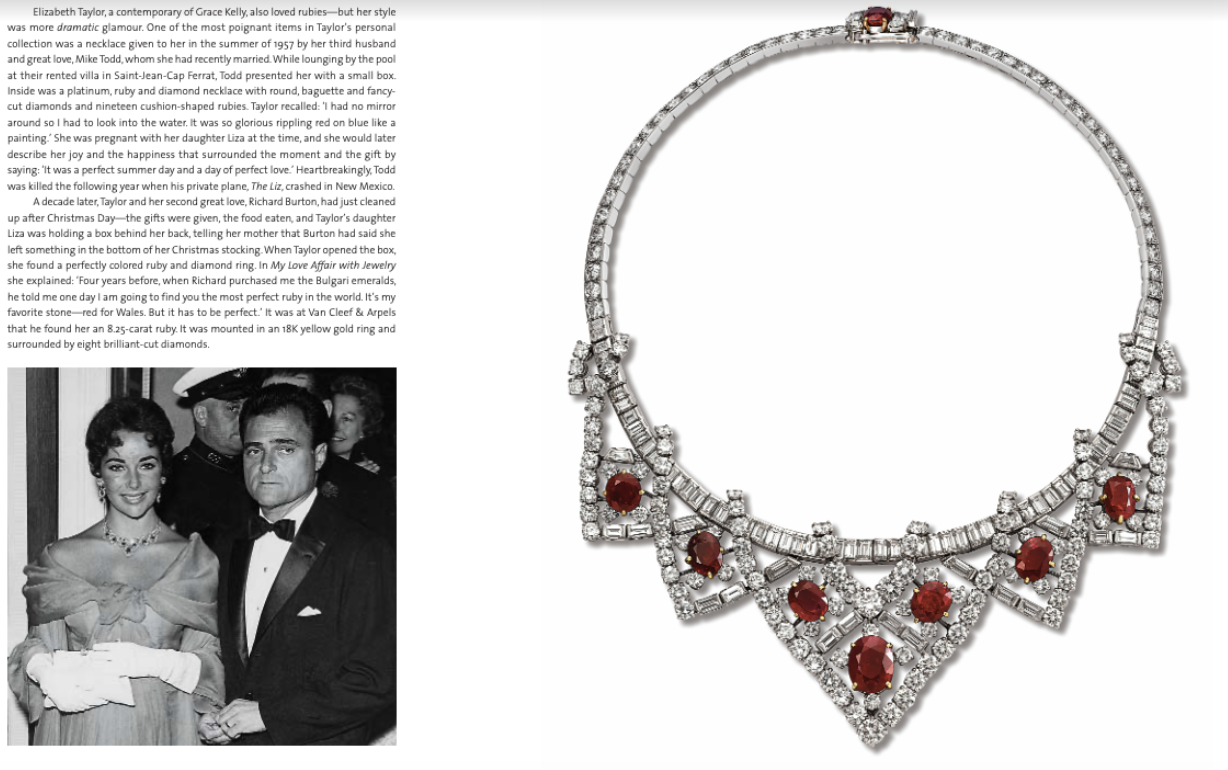 Elizabeth Taylor with Mike Todd in the ruby necklace he gave her, and a close-up of the necklace (Beth Bernstein, ACC Artbooks, 2015)

Elizabeth Taylor’s Rubies
One of the most poignant items in Elizabeth Taylor’s personal collection was a necklace given to her in the summer of 1957 by her third husband and great love, Mike Todd, a platinum, ruby and diamond necklace with round, baguette, and fancy cut diamonds and nineteen cushion-shaped rubies. Heartbreakingly, Todd was killed the following year when his private plane crashed. A decade later, Taylor and her second great love, Richard Burton, had just cleaned up after Christmas Day. Taylor’s daughter Liza was holding a box behind her back, telling her mother that Burton had said she left something in the bottom of her Christmas stocking. He had previously promised to find her the most perfect ruby—it was reportedly his favorite stone—red for his homeland, Wales. He found the perfectly colored 8.25 ruby at Van Cleef & Arpels mounted in an 18k yellow gold ring and surrounded by eight brilliant-cut diamonds. —Beth Bernstein