How to Evaluate and Buy Emeralds: Advice from Muzo Emeralds’ Gabbi Harvey

July 7, 2022
Emeralds have been riding a wave of popularity, wooing customers at the very highest end with their rarity and unique character. Christie’s 2017 sale of the 18.04-carat Rockefeller emerald set a world record, fetching $305,000 per carat.

But unlike diamonds, which are prized for their uniformity and icy purity, emeralds are valued for different attributes—which can make buying and selling these green beauties a more complex endeavor.

For some clarity on the matter, we spoke with Gabbi Harvey, head of business development for Muzo Emerald Colombia, one of Colombia’s largest producers of the gemstone, which is involved in everything from mining to cutting to distributing finished jewels. Whether you’re looking to buy or sell smarter, here are some insights on how to be emerald savvy.

Emeralds Also Use the 4Cs

“We absolutely use the 4Cs [color, cut, clarity, carat weight] for emeralds. Every ‘C’ is important and will make up the final grade and value of your emerald,” says Harvey, adding that Muzo tacks on a 5th “C” for its certification, which provides buyers with a detailed record of a given emerald’s journey from extraction to polished gem.

Harvey explains that the most valuable emeralds are a pure, deep green, without visible undertones. But an emerald’s color “is subdivided into three factors—hue, tone and saturation—which are all equally important.” Hue refers to the overall color, which should be a true green. Tone refers to the depth of color, and Harvey notes that “one does not want an emerald too light or too dark.” Saturation refers to “the intensity of color; the more vivid the emerald, the rarer the stone.”

Emeralds can be mined in numerous places throughout the world but predominantly come from South America and Africa. Like wine, Harvey explains that the difference is a matter of terroir (the complete natural environment in which something is produced): “Colombian emeralds are found in sedimentary rock as opposed to others, which are mined from igneous rock.” The combination of minerals in Colombia’s deposits combine to yield emeralds with a warmer, more intense pure green color. “African emeralds differ slightly,” Harvey notes, “because there is less vanadium, while the additional presence of iron gives them a bluish undertone.” 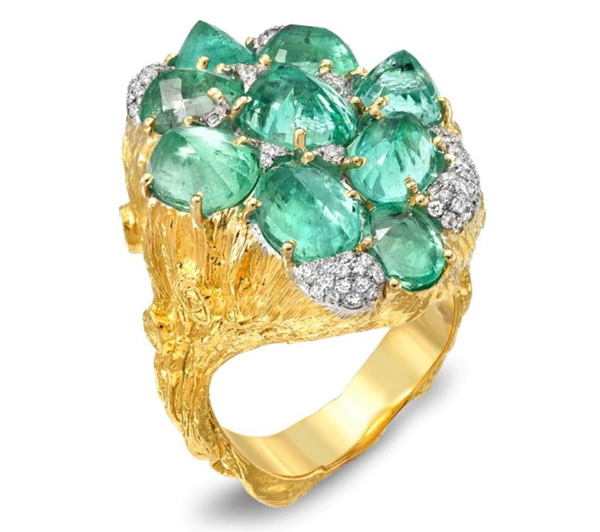 Inclusions Are to Be Expected

“It is very rare to find an emerald with no inclusions, as they are a type III gemstone [the GIA classification for the most naturally included gems]. This has long been expected by the industry,” Harvey says. Unlike diamonds, inclusions are partly an emerald’s selling point: gem dealers often refer to an emerald’s inclusions as “jardins” for their mossy appearance.

Such inclusions detract from value when they affect the emerald’s clarity. In other words, veiny inclusions are expected but they shouldn’t be so extensive that the stone has a cloudy appearance. Harvey also adds that “there may be the presence of fissures, fractures and cavities, which affect the clarity and stability of the emerald.”

Most Emeralds Have Been Treated

“Most gemstones are considered more valuable when they are transparent, meaning there are no visible cracks or inclusions,” Harvey explains, noting that emeralds are almost never truly transparent. “Because these inclusions detract from the emerald’s transparency, emeralds are treated to elevate the gemstone’s clarity and durability.” The naturally occurring fissures in an emerald are traditionally “filled in” using oil, so an “oiled” emerald is a gem that has been treated to boost its clarity.

“The vast majority of emeralds on the market today are treated,” says Harvey. While this practice is widely accepted, it makes “no oil” emeralds, which have a naturally higher clarity, exceptionally rare and valuable. A seller, Harvey says, should be able to disclose whether an emerald has been treated, and with what.

Emeralds Can Be Brittle

Emeralds’ signature inclusions make the stone especially brittle and prone to damage. While most stones are cut to minimize inclusions, and potential for damage, Harvey advises: “Don’t put emeralds in ultrasonic cleaners or expose them to high heat—sudden temperature changes can negatively affect the stone. Clean emeralds gently by submerging in a mild detergent, use a very soft brush or worn-out toothbrush to clean the stone, then rinse in warm water and pat dry.”

Like Loading...
Previous Article
Selling Lab-Grown Diamonds in Your Store—Tips From Retailer Shelia Bayes
Next Article
David Yurman’s New Chief of People Aims to Make the Brand 50 Percent Diverse by 2027