If you haven’t noticed, the bold brooch is making a comeback. Not since the ’80s, when Madonna and vintage-loving goth types sourced antique styles (and preppies donned stick pins) have jewelry pins felt so very on the verge.

At this year’s Cannes Film Fest (which doubles as a global runway for haute jewelry brands), big-and-bold brooches gleamed from every red carpet: Julia Roberts wore a stunning Chopard diamond floral brooch (see below), among others from the atelier (she’s been an ambassador for Chopard since 2021), and model Isabeli Fontana fastened a dramatic, winged Elsa Jin brooch to her dress’ neckline. 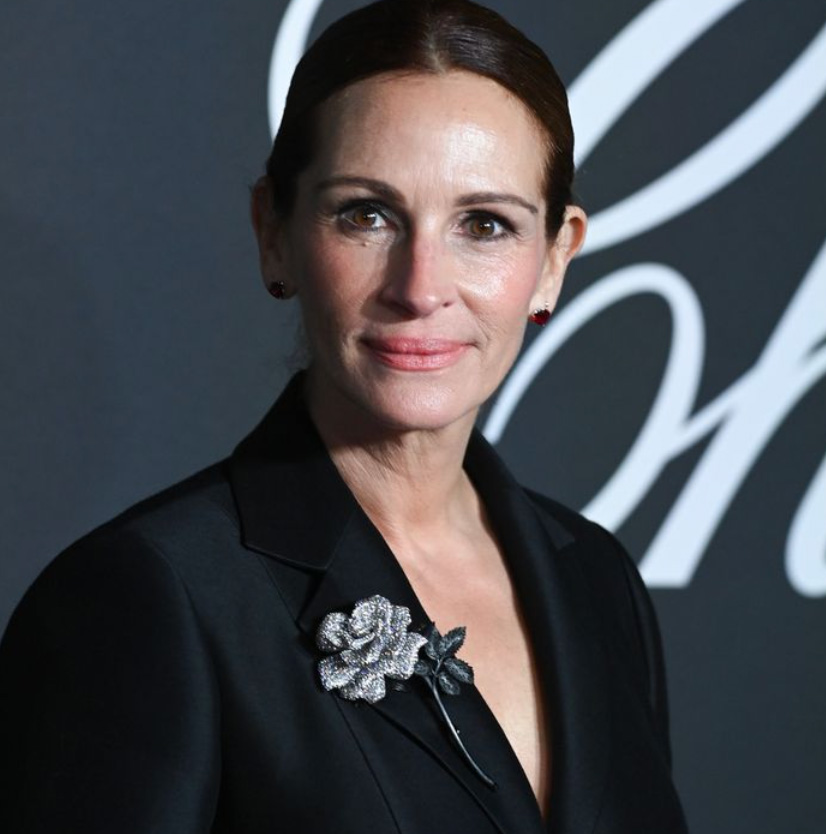 At the Met Gala in May, brooches were everywhere, and styled with verve: Succession actor Jeremy Strong pinned multiple Sidney Garber cameo pins to his suit, while Vogue editor-at-large Hamish Bowles wore a Verdura figurine brooch featuring a baroque pearl and 96 round diamonds.

Diving deep on this pragmatic jewelry item that, throughout its history, has been both ornamental and useful, is the L’ecole, School of Jewelry Arts. The school was founded in 2012 with the support of French heritage jeweler Van Cleef & Arpels, which recently hosted a talk on the history, art, and beauty of brooches.

The Place Vendôme jeweler has long embraced the brooch and counts its bejeweled ballerina brooches among its most recognizable designs. Debuting in the 1940s, the jeweled depictions of graceful dancers reached the pinnacle of their significance when Claude Arpels (maison founder Louis Arpels’s nephew) collaborated on an artistic partnership with George Balanchine, resulting in the choreographer’s 1967 ballet, Jewels. 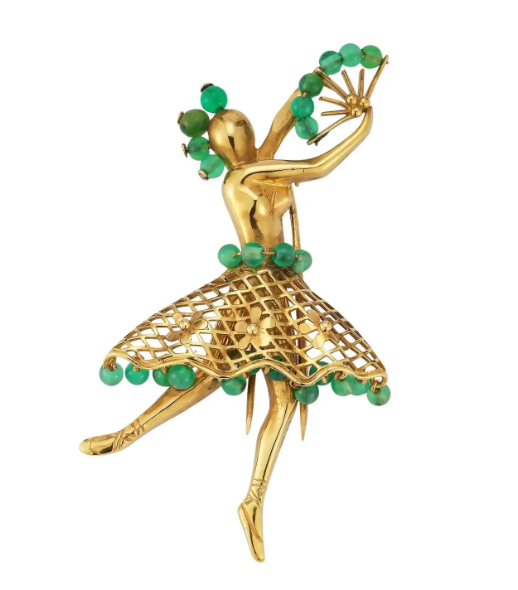 The Zing Report spoke with antique jewelry specialist Gislain Aucremanne, L’ecole’s conferences project manager, to find out more about the historical and modern significance of the back-in-style brooch.

The Zing Report: What was your audience most curious about when it comes to brooches?

Gislain Aucremanne: They enjoyed the symbolic side. The brooch has emerged from its utilitarian role to become more and more an expression of sentiment, and a way to share political views or specific values throughout time, especially starting in the 20th century. The example of Madeleine Albright, former U.S. Secretary of State, using brooches as a diplomatic tool is highly relevant.

Additionally, other forms like the popular Badge-A-Minit examples have been worn by young people since the 1970s. These revealed the range of designs and subjects pinned to t-shirts and jeans jackets that responded rapidly to social movements and needs—and gave graphic identity to protest movements. Followers of music and those who espoused counter-cultural views wore colorful lapel badges. 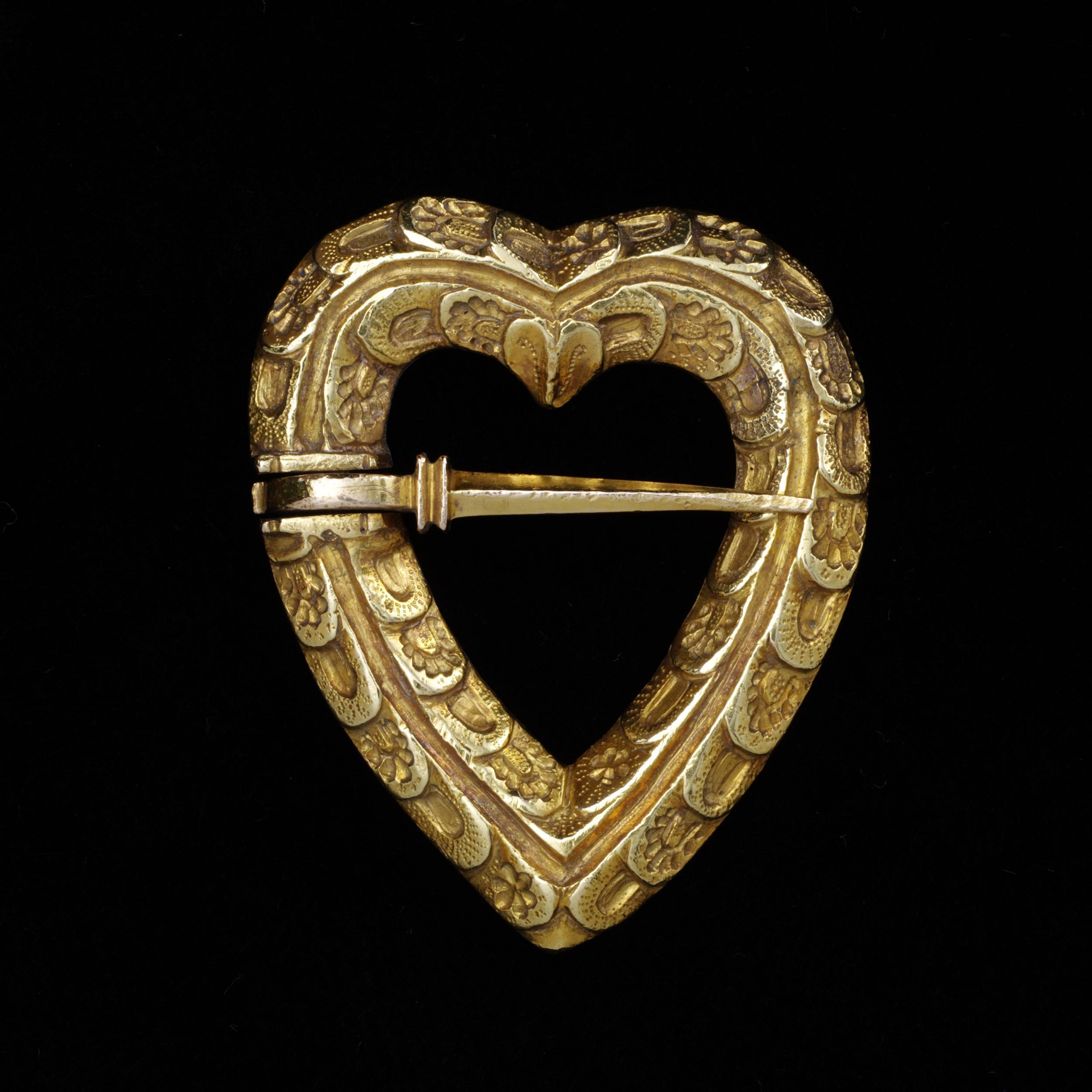 Heart-shaped brooch circa-1400, unknown maker, on display at the Victoria & Albert Museum

The history of the brooch is perhaps as complex as humanity. Mysterious spiral bronze fibulae [the plural of fibula, which is Latin for fastener] from antiquity tell us that humankind perhaps used this utilitarian object to secure clothing since the dawn of civilization.

It’s difficult to know where [the brooch] was invented, but it was used in the Mediterranean basin. Greek examples from the Mycenaean civilization (1650-1100 BCE) are among the oldest.

As for all jewels, the gem-filled brooches historically were more precious, worn by the highest nobility. Precious stones—diamonds, rubies, sapphires, and emeralds—were favored. But great examples…exist with fine stones such as garnets, amethysts, or others. The fibula was probably the most important piece of jewelry because of its practical use [which was] based on the safety-pin principle. They represent an improvement on the less-secure earlier dress pin, which could fall out.

From 1100 to 1400 CE (the Middle Ages), the medieval brooch was the dominant type of jewel used as a dress fastener. Until the development of buttons, not widely used until the 14th century, brooches were used to clasp and fasten layers of fabric together on long garments such as cloaks and the necks of tunics.

How and when did brooches evolve into ornamental objects?

Since the 17th and 18th centuries, brooches [have been considered] “bodice ornaments”—worn by women and not functional anymore…In the early 17th century, France took the lead in art, fashion, and jewelry. Bejeweled pieces replaced fabric ribbon bows. The bow was a popular motif in Baroque jewelry. This textile…became a classical motif in the history of brooches.

Brooches have fallen in and out of fashion. Why do you think they are back in right now?

This jewel had an incredible evolution from the fibula to the clip. They are versatile jewelry to wear in many ways, even in unusual places such as on hats, belts, or in hair. The age of the ladies is over; these jewels are worn equally by both genders. Hence the hashtag #BringTheBroochBack is seen regularly on social media.

Brooches allow a three-dimensional creation, and are revered by designers, jewelers, and wearers alike as “portable sculptures” and a source of inspiration for creators. The brooch came back via auction houses and important art fairs and blurred the line between jewel and object and objet d’art.

Top: Van Cleef & Arpels extraordinary Pavot brooch, made in 1956 with rubies and diamonds