“By a woman, for a woman,” has been the tagline of bridal jewelry brand Sylvie since designer Sylvie Levine founded the brand in 2007.

Levine, who’s an unfailingly friendly (and chic) presence at JCK Las Vegas every year, is a rarity in the bridal jewelry market. Not only because of her design prowess, which is formidable, but also because she’s one of the only female founders of a major bridal jewelry collection in the world.

This year, as her company celebrates its 15th anniversary, Levine is welcoming the next generation into the family business.

Gary Levine, Sylvie’s 26-year-old son, recently joined the Plano, Texas-based firm and has already made a significant mark on the look and feel of the brand. Alongside Sylvie, Gary has spearheaded a “brand evolution” of the company that’s included a splashy new campaign called “Shine On,” a refreshed logo, and a website revamp. He’s also provided valuable input on the product side, Sylvie says.

“I think we’ve needed to do all these things for a while, and it makes sense that Gary is involved,” Sylvie says. “There’s no question he sees things with a different eye and has a fresh eye. And as a bridal jewelry company, we cater to his generation.”

Gary, who began his career working on Wall Street, says he’s been able to transfer several skills from the financial world to the jewelry industry, but notes, “Every role has a learning curve, and today, I’m right at the beginning of that journey. There’s so much to refine about my knowledge of our industry, its history and the multiple facets of our business. Today I’m in that inaugural chapter which is essentially a long process of immersion.”

Like many diamond jewelry brands, Sylvie has seen strong growth in the past couple of years, “and I feel for me personally we’re seeing the fruits of our labor,” the founder says. “it’s a very competitive market, and I feel the hard work has really paid off and that we finally see this incredible response—and we see retailers be so successful.”

The brand’s success makes it an ideal time to welcome in the next generation, and the Sylvie says her son has “a great eye for beauty in terms of graphics and design; he has a very high standard and really good taste.” Gary led the creation of the latest look-book for retailers, and “if you compare it to the ones before, it’s [elevated]. Retailers are saying ‘Whoa!’”

Sylvie is also grateful to have a young Millennial on board to help shepherd the brand into retailer’s future (and all-digital) arenas. “There have been so many changes overall in the world in terms of how the younger generation shops, responds to ads and platforms where they’re, social,” she notes. “There’s a lot to get on board with, and I think it’s not as natural for us as it is for him.”

Sylvie and her husband, Sylvie and Spectrum Diamond president Ian Levine, didn’t push Gary or his brother, Steve Levine, who lives in Austin, Texas, to join the family business—in fact, Sylvie says, they nearly discouraged it, for fear that one or both would feel “pushed” into the jewelry life. 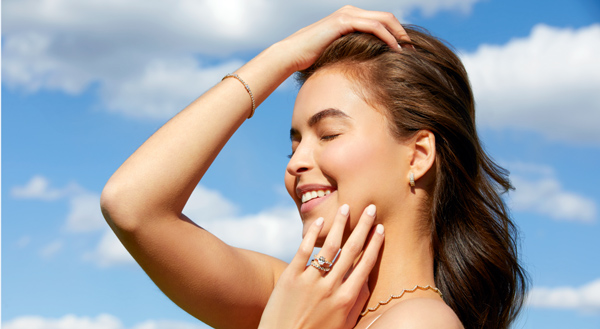 “Candidly, I wouldn’t have found myself in the world of jewelry organically if it wasn’t in my blood, but I’m extremely grateful and happy to be part of this special industry,” Gary says. “It’s stimulating to be challenged creatively and analytically every single day, all while building meaningful relationships. Above all, it’s fulfilling to work with family, especially considering the strong bond my brother and I have with my parents.”

So far, mother and son say working together has felt natural. “It’s really nice that there are no boundaries in terms of trust and what you can discuss,” Sylvie adds. “There’s a feeling of openness. We didn’t take it lightly when we decided that’s what he wanted to do. My husband and I have a very good relationship with our kids. We know who they are.” —Emili Vesilind

All photos courtesy of Sylvie

As consumers becoming increasingly aware of lab-grown diamonds, they will naturally gravitate...

Family-owned jewelry retail chain Reeds, which has over 60 stores in 13...

’Tis the season to social media post your heart out! And jewelry...