Check Out the 555 Ct. ‘Enigma’ Black Diamond Headed to Auction Next Month

It has a name befitting its extraordinary qualities: The Enigma. And at 555.55 cts., it’s about the size of a plump clementine orange. Though it is indeed a diamond, it’s far from brilliant and fiery. That’s because it’s black, or what’s known as a “carbonado” diamond among gem-savvy collectors and dealers.

Intrigued? So was Sotheby’s, so much so that their upcoming sale of The Enigma has been organized with the utmost discretion and secrecy (ooh, the drama!). The stone was unveiled for the first time ever today at Sotheby’s Dubai; from there it will journey to other parts of the world for more previews ahead of its single-lot online auction that begins Feb. 3 and runs through Feb. 9. Its sales estimate is $4.1 million-$6.8 million.

Here’s what we know about carbonado black diamonds: they date back from 2.6 to 3.8 billion years ago and are found exclusively in Brazil and The Central Republic of Africa—two regions which were once connected as part of the supercontinent, Rodinia, an area believed to have been struck by meteorites. The reigning theory on how they got there is that they hail from the cosmos— from a meteoric impact or from a diamond-bearing asteroid that collided with Earth. The naturally black diamonds contain osbornite, a mineral uniquely present in meteors. They also bear traces of nitrogen and hydrogen (both elements are abundant in interstellar space). 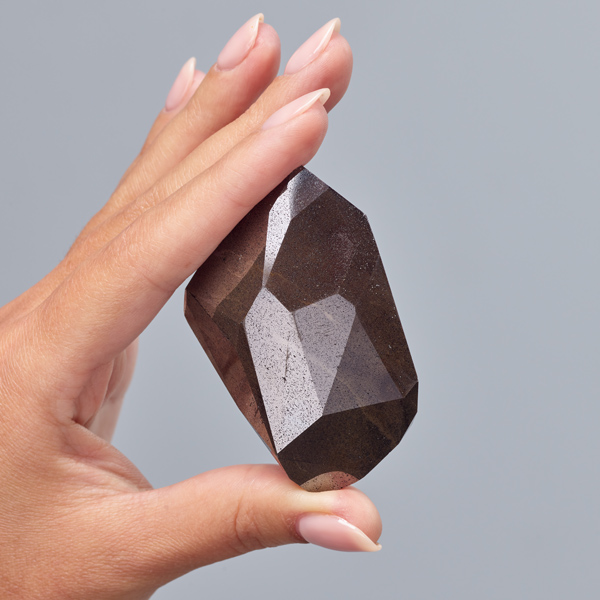 Big Rock: The ‘Enigma’ 555.55 ct. carbonado black diamond. The number five itself is considered lucky, especially in Chinese culture. At 555.55 cts., with 55 luminous facets catching the light, the specs of this stone alone could signify an auspicious outcome for its highest bidder (all photos courtesy Sotheby’s)

Enigma’s origins may be shrouded in mystery but there’s no question it’s “a marvel of rarity and size,” said Nikita Binani, jewelry specialist and head of sale, Sotheby’s London, in a prepared statement. It’s also been cut and polished to reveal a kind of otherworldly artistry. Its unique shape is inspired by the Hamsa, a Middle Eastern palm-shaped amulet (also known as the Hand of Fatima) that’s a revered by many cultures and religions as a symbol of protection, power and strength.

“This diamond has been treasured for over two decades by the owner, and the diamond itself has never been exhibited publicly or offered on the open market, so we are thrilled to have the opportunity to tell its story to the world. Its sale represents a once-in-a-lifetime opportunity to acquire one of the rarest, billion-year-old cosmic wonders known to humankind.” —Amy Elliott

Like Loading...
Previous Article
Jewelry Writer Debuts Jewelry E-Comm to Fund Dog Rescues in South Korea
Next Article
How to Spot (and Stop) Employee Theft at Your Store