Poke around Instagram lately and you might have noticed that manicures have recently transformed from basic, solid colors to opulent artistic canvases, particularly popular among the Gen-Z and Millennial sets. Nail artistry, which originally flourished in Black communities in the U.S., has become how many young people express their personal style.

French tips—not in classic white but rather every shade of the rainbow—as well as elaborate hand-drawn shapes and figures are amassing top nail artists thousands of followers on Instagram and sending many women and men to the nail salon to emulate their favorite looks.

The trend is a natural one for jewelers looking to add interest—and latch onto a powerful cultural wave—in their social media and marketing.

Chicago-based Symone Snowden-Wright, who launched her vintage jewelry business this year under the moniker Gaudy Gems on Instagram, uses nail art as the backdrop for her (not at all gaudy) gold charms, pendants and stud earrings. “Nail art can be incorporated into how you merchandise your jewelry, how you source and, even more importantly, how you show your customers your style,” she explains.

While many jewelry retailers excel in their product merchandising, few have tapped into the potential of nail art for communicating a certain mood, vision or energy. Snowden-Wright, however, understands the visual power of harnessing the nail art trend. “Sometimes it can be difficult to move certain pieces, but by changing something as simple as your nails it can allow someone to look at a piece with a fresh set of eyes.”

For a small, independent business, creative nail art serves as the ultimate branding tool, which Snowden-Wright uses strategically. “I typically am inspired by art, colors and the seasons of the year for my nails,” she says. “I also try to think of designs and colors that will compliment what I have in stock or coming into stock.”

The jewelry possibilities in nail art don’t just stop at branding and merchandising. Some jewelry designers view nail beds as just one more canvas primed for adornment. Nail rings are a signature for NYC-based Bijules, the fine and costume jewelry brand helmed by Jules Kim.

As a child, alongside her twin sister, Kim recalls plopping olives, raspberries, and drug store press-on nails onto her fingertips, “to impersonate a sophisticated woman version of ourselves.” The “Bijules Nail Ring,” which debuted in 2008, was an evolution of that childhood experience, what she calls “an adult curiosity to claim the nail bed as unchartered territory for jewelry.”

Inspired by a 1980s stiletto-shaped nail with a serpent wrapping around the tip of the finger, Kim says there isn’t just one type of client for her atypical jewel. It elicits reactions of “humor, mischief, nostalgia, or sensuality” from a broad range of people, from her 93-year-old Korean grandmother to Beyonce, who sported a set in 18-karat gold with diamond pave and rubies for her “Sweet Dreams” music video. 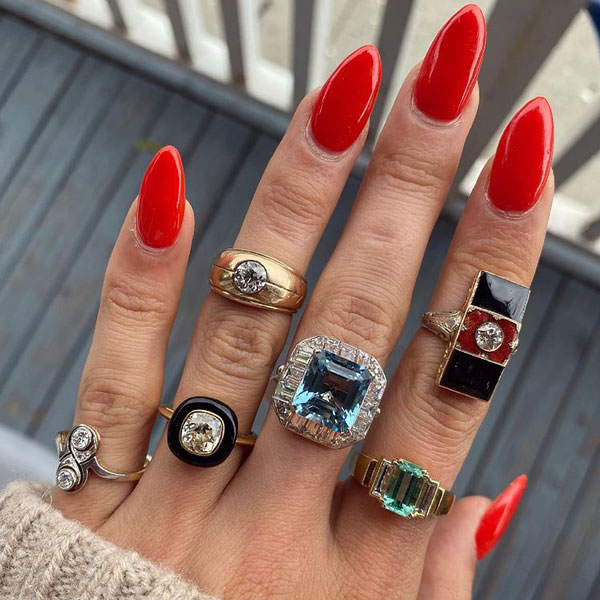 Other designers have experimented with non-traditional rings to compelling effect, like these avant-garde styles from Sterling King, which provide an actual frame for nail art.

“The Helmet Ring was one of the very first jewelry pieces I ever created,” King says. “I was really interested in exploring jewelry that felt like part of the body, rather than a separate adornment. In researching, I looked at medical journals and drew inspiration from different casts and treatments used through history. I spent a lot of time honing the fit to ensure it fit the natural contours of the finger, while also being snug enough to stay on through the day.”

In the current nail art craze, the Helmet Rings have the added bonus of being able to accommodate long nails. “I wanted the Helmet Rings to accentuate the nails, rather than cover them up, and work as a natural extension of both the body and nail design,” King explains.

With plenty of creative manicures utilizing crystals and dangling charms for their own jewelry-inspired effect, there’s no telling what artists in the nail and jewelry worlds will come up with next.  One thing, however, is for sure, and that’s that nail art is a relatively easy way for retailers and designers to connect with more customers.  Vintage dealer Snowden-Wright says, “Having fire nail art truly elevates the look of the jewelry, but also shows the world your creativity and personality before you even say a word.” —Dylan Clark

Like Loading...
Previous Article
What’s Next for the Pre-Owned Watch Market? A Chat With Bob’s Watches’ CEO
Next Article
5 Big Jewelry Trends to Watch in 2022