GIA is Investing in a Mercury-Free Mining Future

As both jewelry retailers and consumers rally for more transparency surrounding the environmental impact of the gold and gems they buy, the Gemological Institute of America (GIA) is investing in research it hopes will lead to the eventual end of toxic mercury use in artisanal and small-scale mines.

Earlier this month, GIA awarded a $50,000 grant to the independent Mercury Free Mining (MFM) and the Alliance for Responsible Mining (ARM) to focus on mitigating mercury use in artisanal gold mining in rural Ananea, Peru. The grant provides funding to evaluate ore-testing processes that have the potential to reduce or eliminate the inadvertent release of 5,440 kg of toxic mercury every day by more than 15 million artisanal and small-scale gold miners around the world.

Mercury is used to recover minute pieces of gold mixed in soil and sediments in the mining process. And according to the Environmental Protection Agency, about 20% of the world’s gold is produced by the artisanal and small-scale gold mining sector. These mines are also responsible for the largest releases of mercury to the environment of any sector globally. Artisanal and small-scale gold mining releases approximately 400 metric tons of airborne elemental mercury each year, polluting the air, water, and earth, impacting the global food chain (it’s why larger predatory fish aren’t as safe to eat now).

The temptation to use mercury in gold mining is steeped in economics, says MFM founder Tony Pomeroy, who summed up producers’ attitudes with, “Yeah, mercury poisons them, but they work faster and make more money,”

Pomeroy founded MFM in 2017 after years of trying to rally support behind the cause. In 2019 he formed a board, which set programs in motion. But the organization really kicked into growth mode in 2020, when it received a JCK Industry Grant. After hearing MFM was receiving the grant, Pomeroy recalls thinking, “Okay, now we’re established — we have a great board and the industry is saying, ‘Yes, this is important to us.’” 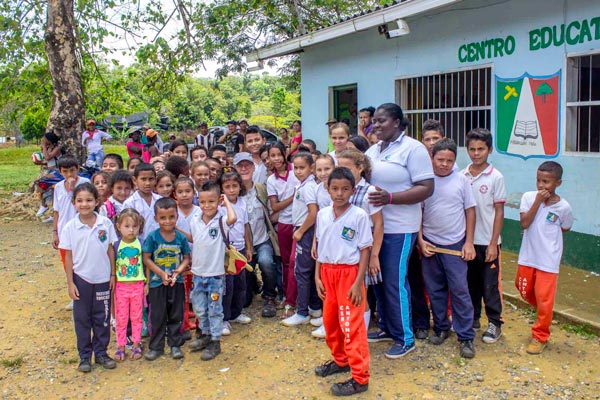 Utah-based jewelry brand Lashbrook also supports MFM, and its owner, Eric Laker, sits on its board. ‘Eric said, ‘I’m in, this is really important.’” Pomeroy says. “And Lashbrook has made a significant contribution to keep us afloat.”

The Peru project is part of ARM’s Sustainable Mines Program, which connects small-scale Peruvian miners to jewelers and refiners who pay them a premium for them to meet certain social and environmental standards.

MFM and ARM are using the GIA grant to import gold ore samples—alluvial, meaning gold that’s been washed away from sources then tumbled through rivers and creeks. MFM will analyze the ore for grain size, shape, and structure, then test it with four different processors, located in the U.S, Columbia, and Peru.

“We’ll have them record all these results, then we’ll be able to map that against the cost of equipment, infrastructure, and the demand for technical skill, down to the grain size. We will know what they are able to capture.” Ideally, the four processors capture a smaller grain size than the miners do using mercury, proving they can have better yields—captured faster and more cheaply—without the toxin. “Then they’ll see they can make more money faster,” explains Pomeroy, asserting, “If they don’t make more money, no matter if it’s more efficient, they will not give up mercury.”

It’s unclear if the mercury-free method will be more efficient than the Peruvian miners’. But either way, the initiative’s process will result in vital information gathering that could be central to strategizing safer, more environmentally sound small-scale mining methods in the future.

“We will learn what miners there are looking for,” Pomeroy explains. “We want to learn from them so we can be more effective in reaching indigenous and artisanal miners; we’ll find things out like how much we need to document and pictograph processes.” The organizations will also submit a report to GIA that will form the basis of a special article in a future issue of their scientific publication, Gems & Gemology.

The initiative consists of methodical, scientific work, but GIA president and CEO Susan Jacques had consumer in mind when writing the check: “Consumers care deeply about sustainability and responsible sourcing and want to see evidence that the industry supports and embraces positive initiatives across the supply chain,” she said in a prepared statement. “The vital work supported by this grant is an important part of GIA’s…continuing effort to advance sustainability and responsible sourcing.”

Like Loading...
Previous Article
Everything You Need to Know About Anti-Money Laundering Laws
Next Article
13 Reminders that Sapphire is a Many-Splendored Thing